A few weeks ago, I posted about my start date along with a caveat, right there in the title. It turns out that was a good idea! After chatting to my immigration lawyer, she said ‘There ain’t no way Jack’ (paraphrased) to the proposed start date of August 1st, this time via email.

My start date was thus altered to September 1st. As of this afternoon, I’m now the proud owner of a set of Visa Application Documents, some forms, and a shiny interview appointment at the US Consulate near Marble Arch. I thought I’d talk a little about what’s been required to get to this stage.

As I said in my original post on this site, I asked the original question back in December 2016. It’s taken several months to get to the point where all of the approvals were in place, internally, to get this moving. Once the final button was pushed, things progressed to the Erickson Immigration Group (EIG) who deal with things like this for my company. 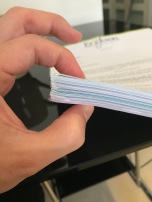 So far, they have been fantastic and highly, highly efficient! This morning I received a FedEx’d package all the way from Arlington, Virginia, with what I thought was the beginning of a screenplay, judging by the thickness of the sheaf of papers within.

I was somewhat relieved to discover that a lot of the documents inside are there in triplicate and, thankfully, not covered in peat.

If you’re going through this process, what should you expect?

Firstly, I’d already had to fill in a load of information about myself and my professional life with EIG. Who I am, what I do, where I live and have lived, where I work and have worked. Who my parents are, and so on.
I also had to fill in an ‘L1 Blanket Questionnaire’ (L1 Blanket being the type of visa I am applying for) detailing what I do, and why it’s important to the company that I specifically move to the US to do the job.

That was a couple of weeks ago, and now I have the fruits of that labour in front of me.

Up front is the G-28, or ‘Notice of Entry as Appearance as Attorney’. This document appears to be simply information about those applying for this visa on my behalf (the Petitioner – I, as the Beneficiary, am represented by someone from the company who is, in turn, represented by legal powers from EIG).

Next we have the key document, the I-129S, or ‘Non-immigrant Petition based on Blanket L Petition’ in triplicate (italics as per the cover sheet of the documents!).
This, as you might surmise, is part of the meat & potatoes of the sheaf. Pages of filled-in tabular data outline the particulars of my petitioner, me as the beneficiary, as well as reference numbers that I imagine link all of these documents together.

Following this is the Letter of Support. Based on the information I’ve provided, EIG and the company have written a letter basically telling the US Government why they need me, what I’ve done, what I do, and what I will be doing.

To get into the US as an Intracompany Transferee, you’re required to possess a Bachelor’s Degree or equivalent professional qualification, or possess equivalent credentials. In my case, my experience is what I trade on. I quit university after my first year (that’s maybe a story for another post) and went straight into the world of work.
It hasn’t hindered me once, but unfortunately immigration processes are kind of backward when it comes to things like this. Just like some people’s (incorrect) assumptions that you need a degree to get anywhere in life, it’s one of the requirements here.
In my case, a letter of support has been written for me, stating that my 12 years of experience count as a 4 year Bachelor’s Degree.

Obviously this is a false equivalence; nobody who had done a 4 year degree would be approaching a fraction of the real world experience I’ve had over those twelve years but, it serves a purpose, so for now that’s what we’ll go along with!
For anybody reading this who doesn’t have a degree, basically every three years of work in your chosen profession is equal to one year of a degree. So keep that in mind.

The rest of the document is my resumé, twelve months of my payslips and associated payroll documents, and some company information.

That’s not all that’s needed though!

One is also required to complete a ‘Nonimmigrant Visa Electronic Application’ or DS-160, and obtain a print out of the confirmation.
This thing took me upwards of an hour to complete, and is essentially all of the information you’ve already given, all over again. You’re also required to submit a Visa-appropriate photograph.

This necessitated a quick trip to Tesco (I also did my shopping for the next few dinners so it wasn’t a wasted trip) to get new photos taken (they must be from the last 6 months).
I used the excellent Scanner Pro for iPhone to scan one of the photos and upload it straight to Google Drive.

Once I’d done that, I then had to make the actual appointment with the US Consulate. Finding this link was actually more difficult than I feel it should have been, but this is where you need to go. I actually found this link first, which then told me I had to fill in the DS-160 form in order to progress.

This process is relatively quick, but will cost you. In my case, £168.10 for processing, and for having my passport couriered back to my home address once they take it from me at the Consulate.

Finally I was at the end, with an appointment booked later in July for first thing in the morning. It’s going to be a very early start, as it’s highly recommended that you get there half an hour before the appointment. The expected time from walking in to walking out with – hopefully – an approved visa is about 3 hours, so it’ll be a long morning!

#outside
Thank you @trescanorthend for a wonderful first proper meal out in over a year! #bostonrestaurantweek #boston #tresca #italian #food
Spotted these two #lamborghini #bugatti #cars #drivetastefully
Went outside.
Took some snaps of @myobikins plants in the study. They all look like they’ve got a story to tell.
Dropping by the old neighborhood on the way home was a good idea #marthasbakery #marthasbakerybayside #baysidequeens #queens #newyork #cheesecake