In The Beginning, there was a job. And, for a time, it was good.

I had been working in IT for a software company for a little over two years and was, on the whole, loving life. I had spent a year living in London, occasionally enjoying all of the things it has to offer, with two lovely flatmates, and I loved what I did and who I did it for. I had travelled the world – well, some of it – with stints in Paris, Munich, East Germany, and the United States.
Colleagues had become friends who had become travel buddies, and along with the decent salary we had explored the snowy mountains of New Hampshire, the concrete canyons of New York City, the sun-kissed beaches of Miami and Key West, and were due a trip to Tuscany, Italy in the first part of the year and an even bigger trip back to the US in October. 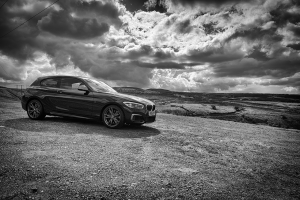 n an even more personal note, I was readying myself to take that next step into adulthood – buying my own property. I had just bought (well, leased) myself my first properly new car – a BMW M135i – after a few years of vehicular strife (that’s another long story) and during that process had stumbled upon a property being sold by a friend’s uncle.

I packed up my things, left London for a short stay with my parents back in (much more rural) Wales and prepared myself for the Next Big Adventure.

Our company was purchased – for a significant amount by a serious buyer – and the world got turned upside down. Not like flipping a pancake though, more like slowly turning an ornate hourglass that was partway done. The individual pieces of sand notice the shift almost immediately, but it isn’t clear what’s actually happening until you reach that point of no return; where what was down has now become up, and the inevitability of what is about to happen is inescapable and irreversible.

Sound dramatic? Well, it should, because that’s how it felt.

Without going into more detail than this post requires, things started to fall apart. In work, what was shaping up to be a project-packed year of continued growth and new ideas ground to a shuddering halt. At home, an unending flat buying experience caused family tensions until it became clear that actually going into a massive financial commitment at all was a huge error in judgement and, after months of wrangling with solicitors, the whole debacle came to an end.

I took the decision to move back to London after months working remotely from my parents’ dining room. After a frantic week of running around London on humid, sweaty Indian-summer evenings and then sleeping on my friend’s futon, I found a place and moved in.

Three weeks later I went to America again on holiday. We had Chicago, Washington D.C., and New York City in our sights. I had never been to the first two, and was looking forward to checking more ‘sights seen’ off my list in NYC, as I’d only been for weekends before.

It was in New York that I met the woman who I would fall for surprisingly quickly. It was her presence in my life – a beacon of shiny and interesting light at the end of an otherwise murky 2016 – that prompted me to ask my superiors for a trip back to the US NorthEast in December. It was granted, then extended for almost a month, and during that time I sat down with my boss and his boss, and asked if maybe there was a chance I could relocate to the US.

They both thought it was a brilliant idea, and promised they would do everything they could to make it happen.

My new journey had begun.

2 thoughts on “The Beginning: A Prologue”

Never, ever, ever book a flight with @iberia
#iphone
Divine food and love from @deuxave for celebrating 5 years with this lovely one 🥰
The “omg @heebeegeebee came to town” surprise visit photo dump 😁
Pennsylvania Thanksgiving Tesla Roadtrip Photodump!!
Seeing @olansound, @gardenstate_music and @aboveandbeyond at @redrocksco was the highlight of my year. Highlight of several years. Red Rocks is an incredible venue and should be a bucket list item for any fan of music. #redrocks #anjunafamily #olan #gardenstate #aboveandbeyond
Loading Comments...
%d bloggers like this: