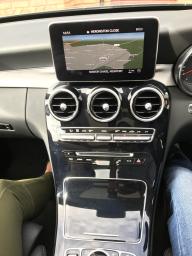 I just want to get it out of the way right up front; I HATE the Mercedes COMAND system. The entertainment and vehicle control systems that ship with modern German luxury cars are all pretty advanced these days. You have the BMW iDrive system, with its fixed tablet on the dash and rotary wheel with optional touch pad. There’s the Audi MMI interface which now supplements the central screen on most models with an awesome ‘Virtual Cockpit’ display that replaces the dials with a TFT to show all manner of data, including maps and navigation. Then you have the Mercedes COMAND system.

It’s just atrocious. A shame really, as the car itself is really very good.

I was driving to a wedding. My girlfriend had flown from New York to London for the week, and the second half of her time here was to be spent in Bath and Wales, soaking up a bit of not-London U.K. as well as meeting my parents and being my Plus One for my third Best Man outing in three years.

I decided that I wanted a decent car to drive, as it was probably going to be the last time I would drive in the U.K. for a long time (penultimate time as it turns out), and maybe even at all – I doubt I’ll be driving much in America to start with.

I chose Sixt as my rental company of choice, as they’ve been good to me before. I can thoroughly recommend them. Getting the car took a while, as there was only one guy serving customers in the weirdly sweltering pickup point at Westfield Stratford in East London, but once my turn came around, it turned out that they had upgraded me – for free – from my chosen Mercedes A-Class to a C-Class.

And what a C-Class. I’d had one before from Europcar, an anaemic C180d that made me thoroughly depressed. This one, however, was different. It was the more powerful 220 variant, and had been specced well.

Pretty LED daytime running lights (DRL) welcomed me into the sumptuous cabin, fitted out in leather, replete with electric seats,  and Burmeister speakers adorning the doors. I grinned to myself as I sat inside; I had been unsure what the A-Class would be like, but this … this was a wagon fit to ferry me and my lovely lady around the roads of England! (And Wales, of course.)

So what of the car itself?

It was a long way from the C180d I’d had a couple of years previously. It was rapid enough to get us up to motorway cruising speed without a problem, with torque from the diesel unit helping out in the low-speed London traffic, as well as around the Welsh lanes later on in our trip. It was extremely comfortable in any mode I put the chassis into (Eco, Comfort, Sport, Sport+) as my girlfriend can attest to – she was lulled to sleep most of the time which, as she later admitted, is a very rare occurrence! 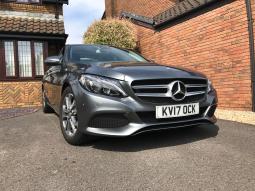 The sound system was also quite impressive. At first I struggled as the previous driver had put the Bass up to 10, but after sorting that out, it sounded quite sweet. Not as good as the Harmon Kardon system in my M135i, but certainly better than any of the stock systems that come in these cars. We had a long way to go and love listening to tunes, so this was a great addition. Add in the panoramic glass roof that made the cabin very light and airy, and it really was a lovely place to spend time.

The seating position was excellent and highly configurable thanks to the electric seats, and the electric folding mirrors were handy when parking it up. They also auto-dipped when reversing, as well as the car having a reversing camera, so navigating forwards and backwards was a breeze!

The only thing I can really knock the car for is … well, kind of a huge thing. The COMAND system. Every interaction you have with the car is via the infernal thing.

Where to start. Let’s go for the control surface. Where Audi has a flat touchpad (that most reviewers will tell you is useless) with a separate click wheel and some key buttons, and BMW has a click wheel with (optional) touch-sensitive centre, surrounding by key buttons, Mercedes has gone for some strange amalgam of the two, and come out with a hideous baby.

The click wheel exists, though it feels quite loose and unpleasant to use. Over the top of that, though, is this weird sort of ‘melted touchpad’ creation. It was unclear to me, even after driving several hundred miles, whether the primary control should be via the touchpad or the wheel. I ended up using a frustrating combination of both, finding functions as I drove. I mentioned the Bass earlier – it took an hour to figure out how to change that, and that was only by accident. It wasn’t even clear how to switch between Bluetooth and USB for my sound source – that was another happy accident.

The navigation itself was very good (no traffic though), but even the act of putting in an address got very frustrating at times thanks to the touchpad monstrosity. What really, really, really annoyed me though, was that there was no apparent way to flick between tracks using the steering wheel controls. A small thing, but I shouldn’t have to take my hands off the wheel for something so common and straightforward, especially when it was to manhandle this ugly monstrosity of a thing.

I won’t go into the graphics of the system, suffice it to say they’re as ugly as the touchpad and the choices of typeface seemingly arbitrary and pointless.

What baffles me, is that this is the same system throughout all of the range. Sure, the range-topping S-Class has bigger fancier screens and a faster processing unit, but the core ugly, stupid user interface is there at the heart of it, and I just can’t understand that.

[…] my brief tango with the Mercedes C220d at the start of June, I found myself in need of another car for August, to move my things from […]